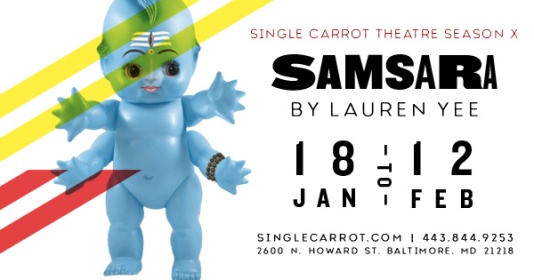 Running Time: 90 minutes with no intermission

Birth – Life – Death… That’s pretty much what Samsara means: We’re born – We live – We die. It’s what happens along that journey is what’s different for everyone and even the start is starting and ending is different. Single Carrot Theatre’s latest offering, Samsara by Lauren Yee, directed by Lauren A. Saunders, with Scenic Design by Jason Randolph, Lighting Design by Thomas P. Gardner, and Sound Design by Steven Kriegle, gives a thought provoking look into what it takes to bring a child into this world, even when it’s not your body your using. It delves into the intricacies of having a surrogate half way across the world and imagines the unknowns of unborn children who sometimes have more common sense than grown adults. It puts human faces on surrogacy and tells a story from both sides of a surrogate pregnancy.

The space at Single Carrot Theatre is intimate and they use the space wisely. From what I understand, the seating chart changes depending on the production and this set up for Samsara gives us a wide stage with room for Jason Randolph’s simple, but impressive Set Design. His use of movable blocks saves space and lends itself to multiple locations, not giving exact detail, but enough for the audience to know where they are. The curves in both the set and the hanging screen gives a whimsical, magical feel and the projections are spot on. Overall, the production value of this piece knocks it out of the ballpark. Set Design, Lighting Design, and Sound Design are worth the admission price alone.

Speaking of Lighting Design, Thomas P. Gardner does a superb job lighting this magical, fanciful piece with just the correct colors and levels, setting the mood for each scene and moving the story line along nicely. Along with Gardner’s work, Steven Kriegle’s Sound Design is on point. Every bit of recorded sound that comes out of the speakers is befitting and well placed. Whether it was Kriegle himself or a collaboration with the director, the music choices are spot on the Sound Design, as a whole, is impeccable.

Taking the helm of this production, Director Lauren A. Saunders does a fantastic job putting this piece on the stage. Her casting is outstanding and her staging is minimal and fanciful, but gives the audience enough to keep up with the complex story. She understands the script, the delicacy of the piece, and the intimate space and presents the story in an accessible way as to not overwhelm the audience but bring them along for the journey. Her understanding and handling of the piece makes for a very enjoyable evening of theatre.

The small ensemble of Samsara puts on an impressive show and the chemistry, for the most part, is clear and these actors are comfortable with each other which makes it easier for the audience to follow along and get engrossed in the touching story their telling.

Single Carrot Ensemble members, Paul Diem and Alix Fenhagen take on the roles of Craig, the kind good-hearted father sent off a half a world away on his own and Katie, the wife and childless mother who, because of her own issues, would not travel with her husband a half world away to experience the birth of their child. Diem and Fenhagen played these roles to the hilt and I can feel the unspoken tension between the characters as they are trying to navigate through a rocky marriage with the difficulty of not being able to have children. It is revealed that neither of them able to produce and that’s where the Indian surrogate comes into play. Why India, you may ask? Well, it’s simply financial and an Indian surrogate is actually much cheaper… thousands of dollars cheaper than an good old American surrogate. The question is, are both of these people ready for a child? Also, to add to the drama, these two characters seem to differ on their ideas of what a surrogate is and how much involvement one should have in a surrogate’s life, making for some pretty intense drama between these two characters.

Diem has a complete handle on this character and is confident in this role. His uncertainty is unmistakable and his kindness shines through making him a very likable character. The character of Craig might be a bit annoying at times, making unwise choices while in India, but Paul Diem gives an admirable performance having great chemistry with both Fenhagen and Saraniya Tharmarajah. Alix Fenhagen also gives a good performance, but seems a bit flat and monotone, in parts where I would prefer little more emotion, but she seems to be playing it subtly and gives a commendable performance.

Dustin C. T. Morris, as the imaginary Frenchman and sub-sequential “dream man” of Katie, is a bit of comic relief and he is 100% to this role. He also takes on the role of the doctor caring for the surrogate in India and he shines in this role, as well. As an imaginary character, he manages to move the story along, giving a backstory to Katie and her ideas of what she wants her child (and perhaps her life) to be as well as the possibilities that frighten her. Morris is radiant and confident and gives a praiseworthy performance.

At the heart of this story is Suraiya, the surrogate for Craig and Katie played masterfully by Saraniya Tharmarajah, whose performance is one of the highlights of this production. She is natural and comfortable in this role and her delicate performance is befitting of this character. Tharmarajah manages to bring forth a silent strength in her character and her chemistry with Rajawat, the unborn Amit, is charming and heart-warming. Kudos to Tharmarajah for her superb performance in this piece.

Speaking Utkarsh Rajawat, he is another highlight of this production as he tackles the role of Amit, the unborn child for whom everyone is waiting patiently. Rajawat’s performance is both charming and poignant as his character is in the mind of the surrogate and he is inquisitive and in awe of everything as he talks with her. Not having been jaded by the world just yet, this character seems to have the only common sense in the group and he has some of the funniest lines in the piece and handles the comedy and comedic timing beautifully. He masterfully plays this character as a doe-eyed child, wanting to learn everything he can about the world he is about to enter and Rajawat’s lovable portrayal makes it hard to feel anything but good, warm, and gooey things for this character. Kudos goes to both Tharmarajah and Rajawat for jobs well done.

Final thought…Samsara is an interesting look into surrogacy and relationships of surrogacy, touching on the deep and intense thoughts and feelings of all parties involved that aren’t always discussed at the dinner table. Single Carrot Theatre’s production is an approachable and accessible expression of those unsaid thoughts and feelings, giving the audience an insight only parents and a surrogate mother can have. This well-put, thought-provoking production should not be missed this season.

This is what I thought of Single Carrot Theatre’s production of Samsara… What did you think? Please feel free to leave a comment!

Samsara will play through February 12 at Single Carrot Theatre, 2600 North Howard Street, Baltimore, MD. For Tickets, call the box office at 443-844-9253 or purchase them online.