Running Time: 2 hours and 10 minutes with one 20-minute intermission

Something funny’s going on and it’s happening at Silhouette Stages in Columbia with their latest offering, Lucky Stiff by Lynn Ahrens (Book and Lyrics) and Stephen Flaherty (Music), with Direction by Conni Trump Ross, Music Direction by William Georg, Choreography by Tina DeSimone, Set Design by Douglas Thomas, and Costume Design by Linda Swan. 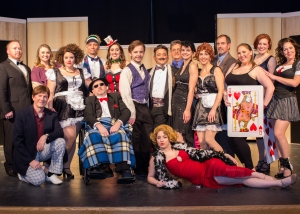 Lucky Stiff is based on a 1983 novel by Michael Butterworth called The Man Who Broke the Bank at Monte Carlo and is about a nobody English shoe salesman named Harry Witherspoon who lives an uneventful life in East Grinstead, England. He learns that his Uncle Anthony, from Atlantic City, USA has died (killed by his legally blind lover), and he stands to inherit $6 million. The catch is, Harry has to agree to take Uncle Anthony’s corpse on a whirlwind Monte Carlo all-expenses paid vacation or all the money goes to Uncle Anthony’s favorite charity, the Universal Dog Home of Brooklyn. Harry agrees and sets out to fulfill Uncle Anthony’s dying wish but while in Monte Carlo, he meets a very quirky cast of characters who have plans of their own for the $6 million.

Have a traditional proscenium (traditional) stage, Set Design by Douglas Thomas is innovative and creative. Thomas begins with a blank stage with black curtains and actually uses a quite minimal design using tri-flats to represent different settings that were easy to move and set up. Not once is the audience confused as to where a scene is taking place and use of easy-to-move set pieces, as well, adds to the production value. The attention to detail is impressive with specific bed sheets, glamorous gold table cloths, and representations of the inside of a plane passenger cabin and a public bus. Overall, Set Design was spot on and added great production value. 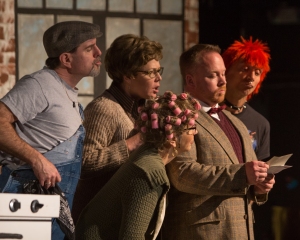 Costume Design by Linda Swann is splendid as this piece musical/comedy theatre, so everything is a little over the top and it is set in present day. Each character has his or her own individual style and each actor’s wardrobe works well for his or her character. Swann gives us a well thought-out, detailed-oriented Costume Design that helps define these zany characters without making caricatures out of them. Working with characters who are stereotypes and even one or two with secret identities, Swann does a bang up job with her design for this production.

No musical would be complete without a little dancing and Choreography by Tina DeSimone is charming and entertaining. I can tell there are some strong dancers in this ensemble as well as some who aren’t as strong as others, but DeSimone really gets her cast and has modified her choreography (modified, NOT dumbed down) to suit her cast and that’s such an important talent for a choreographer to have. She adds in a good old fashioned kick-line (which always goes over well, like it or not) and has her cast moving comfortably on the stage as well as giving her more experienced dancers more challenging choreography to utilize and show of their talents. Kudos to DeSimone for her excellent efforts. 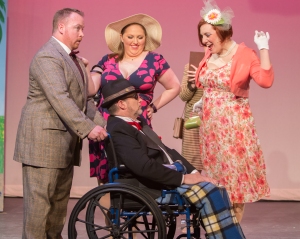 Music Direction was tackled by William Georg and even though this production used recorded or canned music, it is still executed beautifully. Georg has a vocally strong ensemble to work with anyway and in the opening number, “Something Funny’s Going On”, the power behind the vocals certainly makes the audience take notice and clearly announces this production is ready to begin. Georg mentioned that the system used for this production is more than just pushing a play and stop button, but more interactive and he actually controls cues and timing in the numbers which is quite impressive seeing as though he provides all of the sound effects required, as well. The cast sounds brilliant and, from where I was sitting, not one cue was missed so, major kudos to William Georg on his musical work.

Direction duties are tacked by Conni Trump Ross and she has put on a well-thought out, well put-together production. Her casting is top-notch and fitting and the pacing of this piece keeps it interesting and ending at an appropriate time. Ross seems to understand this piece and the story it tells, while keeping in mind the comedy that goes along with it. She doesn’t take the piece too seriously, but gets the important message across of taking that leap of faith once in a while and trying new things because you never know what can come of it. With Ross’ superb guidance, the ensemble is able thoroughly and seamlessly tell this crazy story.

This is definitely an ensemble piece and the entire ensemble knocks it out of the ballpark, making this an enjoyable, fun evening of theatre.

Don Patterson takes on the role of the neurotic, optometrist Vinnie DiRuzzio. Poor Vinnie, who also happens to be the brother of one of the women after Harry Witherspoon and the $6 million, is dragged into this story kicking and screaming but takes it all in stride. At first glance, Patterson seemed a little out of place, being a tad older than the rest of the “main” cast, but after a minute or two, that is forgotten and he fits right in with this crazy cast of characters. He seems to grasp the character of Vinnie and his neurotic tendencies and portrays him well. Patterson is comfortable in his role, is confident, and does a great job, vocally, with his numbers such as “The Telephone Song” and his duet “Rita’s Confession,” giving a strong, solid performance.

The beautiful Alyssa Bell takes on the role of the beautiful Dominique DuMonaco, a club singer who is “hired” to show harry a good time while he’s in Monte Carlo but ends up in a bit of a different arrangement by the end of the piece. Let me say that I am thoroughly impressed by the effort Bell gives to her character. She especially gives 100% to her solo number “Speaking French” and she is a joy to watch, tackling more challenging choreography while having to belt out a doozy of a song. Though the challenging choreography may have affected her vocal performance a bit, not allowing her to take a much needed breath in her song and belt it out as it should have been, she still does a stellar job with this part. She plays her character flawlessly with just enough “slinkiness” to make her sexy, but also enough naivety to make her innocent and likable. Her accent is commendable and, overall, she her performance is quite admirable. 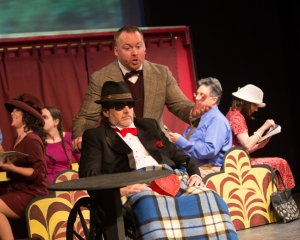 Rob Wall is superb as Harry Witherspoon and really embodies this character making it his own. As the character in which this story revolves around, Wall holds his own and the responsibility quite well giving a strong, self-assured performance. His chemistry with the rest of the ensemble is effortless and helps make his character more authentic. He does a great job maneuvering Uncle Anthony (played brilliantly by a still and quiet Mike Cornell) around in a wheelchair and not crashing into everything up on the stage, which is actually a pretty impressive feat. I would like more volume from him during his songs but he does belt the high money notes, which is natural and, vocally, Wall is a dynamo, with his smooth bari-tenor voice resonating throughout the theatre. He understands his character and you can see the insecurities in the choices he makes onstage and within his face and mannerisms, making for a fine and praiseworthy performance.

Maddie Bohrer, a newcomer to Silhouette Stages, takes on the role of Annabel Glick, a straight-laced, no-nonsense representative from The Universal Dog Home of Brooklyn, just waiting for Harry Witherspoon to trip up, just once, so the $6 million can go to the dogs, instead. Bohrer is absolutely charming and sweet in this role and she plays it beautifully. Her transition from “all-business” to letting her hair down is smooth and effortless and her chemistry with Wall is brilliant. I wouldn’t necessarily consider Bohrer a coloratura soprano, but her voice is sweet and strong and it works perfectly for her character and, on side note, I’d love to see her wail in a rock-opera sometime, just to see what she can do! Her performance is robust  and on point and a joy to watch.

Kristen Zwobot as Rita La Porta is a standout in this production. From the moment she steps on stage she is in character (the stereotype of a New Jersey gangster girlfriend) and she is consistent throughout the piece. Her comedic timing is spot on and it helps that she grasps the comedy and her character allowing her to have a good command of the stage. Her look, character choices, and use of a New Jersey-esque accent make for a funny, hearty performance. It’s worth mentioning that Zwobot is a bona fide vocal powerhouse. Her voice is strong and clear in numbers such as “Rita’s Confession” and “Funny Meeting You Here,” filling the entire theatre (and then some) making for an outstanding and memorable performance.

Final thought… Lucky Stiff is a fun, fast-paced farce that is sure to tickle your funny bone and have your toes tapping. The material from Ahrens & Flaherty is catchy and easy to listen to and the production is well-thought out and put-together. The entire ensemble is dedicated and gives 100% to their performance and they tell the story effectively. Make sure you add this to your list of things to see this season because you won’t be disappointed.

This is what I thought of Silhouette Stages’ production of Lucky Stiff… What did you think? Please feel free to leave a comment!